BACK IN THE DAY, publicists would do anything to get coverage in one of the half-dozen (or more) daily big city papers.

Always surefire, was "get a pretty girl to promote it." Like, the Randalls' Island Jazz Festival.

Who cares about that? How many readers know or care about who Don Elliot is? We're a busy newspaper, why should we promote some bunch of guys playing jazz on Randalls' Island?

Wait...wait...let's get JULIE NEWMAR to hold a trumpet! Give some other babe a french horn. Point drumsticks at some other starlet. NOW you've got a picture.... 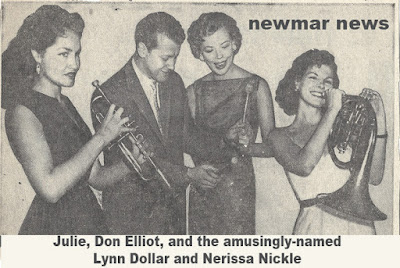 This shot ran in THE JOURNAL, and maybe it caused a few people to run to Randalls' Island, hoping a few of the girls would be there.

Julie was the star of this trio, only a few months away from her debut in "Li'l Abner," and already a cover girl with several film credits (including the "golden girl" in "Serpent of the Nile."

Ms. Nickel (french horn) was somewhere in the cast of Roz Russell's "Auntie Mame." Trivia fans might note that Lynn Dollar, decoration on "$64,000 Question," began to get serious. A mere year after this photo was taken, she won the position of weather girl at WRCA-TV.

He first achieved fame as "The Crying Comedian," doing an act that included "woe is me" one-liners that were punctuated with mock hysterics and tears. Ed Sullivan loved him, and booked him often.

He even issued an odd single, "How Does It Feel?" which had him chuckling to an ex who has endured a breakup. "Does it hurt? Heh heh. Are you blue? Ha ha ha." Chorus: "How does it feel now that it's happened to you?"

Not exactly "I Wanna Be Around," but...sort of Tony Bennett on helium.

Perhaps a few Demento trivia fans would put it on the same warped shelf as Allen Swift's cover of "Are You Lonesome Tonight," which, more in the Taylor-made vein, has him breaking out into comical sobs and rages.

We all know what happened after a while: Rip Taylor morphed into the zany, confetti-throwing kind of desperate sight gags and outrageous one-liners, his wild eyebrows matched by his mountainous wig, which made him look quite a bit like Frank Morgan's doorkeeper character in "The Wizard of Oz."

When I was editing RAVE ("the Playbill of comedy clubs") I had the good fortune to sit in with Rip as he guested on the Alan Colmes radio show, and then walk around midtown with him afterward. He was kindly, fun, and a great guy.

Julie's main connection with Rip Taylor was co-starring in a sketch with him for the hour-long "Minsky's Follies," which was released on VHS by RKO Video.

Here's Julie at a little "memorial" to Rip, with some of Taylor's friends. In the purple, to the left of Julie, is the Laugh-In legend Joanne Worley. 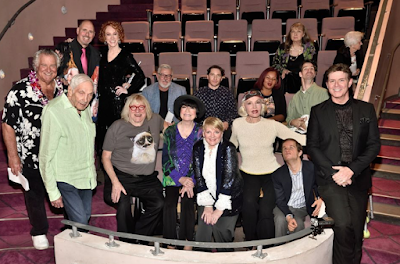 Noise annoys. Julie called attention to the problem several years ago, but in this "PC" age, there was backlash. Huh?

It seemed that some were defending the noisy leaf blowers because they were being wielded by "people of color," and many were pitiful poor immigrants. Should they have to go back to using old-fashioned rakes, as people all over the world have used for hundreds of years?

The facts are that most of the leaf blowers are owned by, guess who, home owners. They have enough money for a home and a garden, and they're just plain lazy. Some get a thrill out of making noise; probably the same people who love to ride motorcycles through quiet suburbs on a Sunday morning. Those that employ gardeners, which include very rich people in Beverly Hills and Santa Monica, pay very good wages.

At this point, we're seeing...what, the turning over of a new leaf? Here's an article from a recent issue of THE ATLANTIC. It's from Jame Fallows: "GET OFF MY LAWN: How a small group of activists (our correspondent among them) got leaf blowers banned in the nation's capital.

HERE'S A DIRECT LINK TO THE ARTICLE on LEAF BLOWERS The articles starts this way: 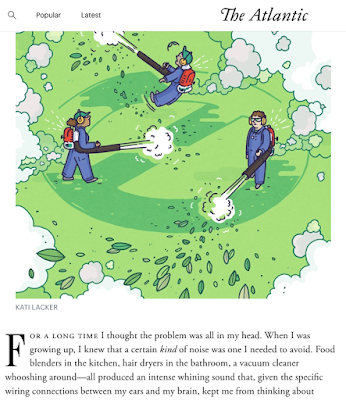 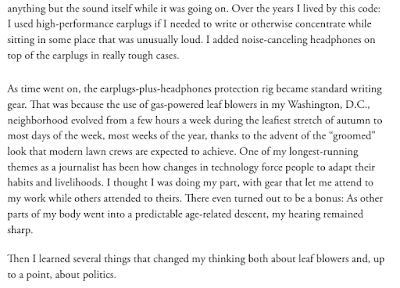 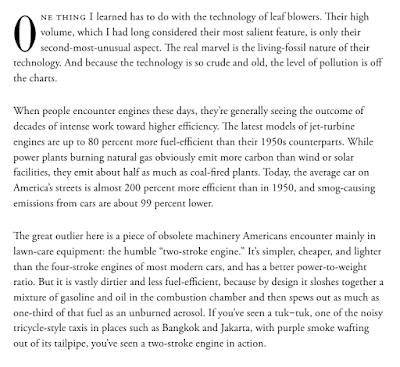 But would they have anything GOOD to say about him?

A slight mis-communication in the booking... 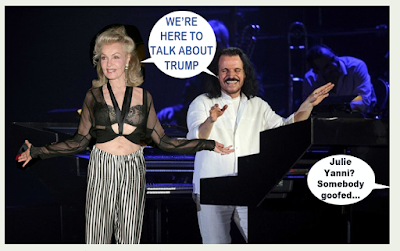 This just in from the mental hospital....

Most of Julie's contemporaries, including Ruta Lee, Jackie Joseph, Angie Dickinson, Dawn Wells, Barbara Feldon, Diana Rigg, Terry Moore and Diane McBain, either are not on Facebook at all, or post nothing but a photo once in a while or a reminder that photos are available for purchase.

Julie will give a lot more, including delving into politics. Sometimes this gets some dangerously snarky comments from people on the other side of the issue, but that's balanced by some charming off-topic cries of love and devotion.

Someone gets out of a mental hospital and first thing, posts a love letter on a thread about Trump? That's something. 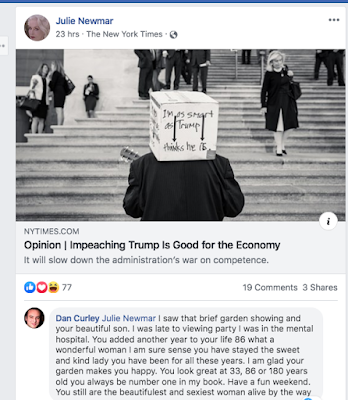 Give the guy credit for openly stating that he's a mentally ill Julie Newmar fan. Further down on the thread? Some people who would tell you they are perfectly sane. They have people "liking" what they've written, too. 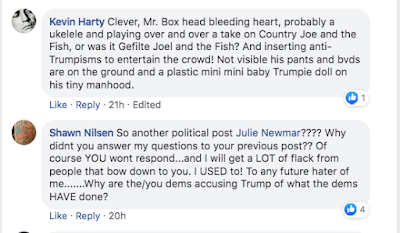 People are positively sure that what they post is not going to raise a red flag. It's all "communication." Every picture tells a story, and every comment paints a picture, too. 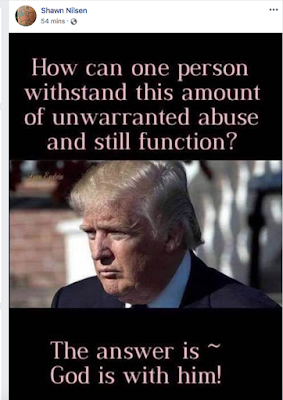 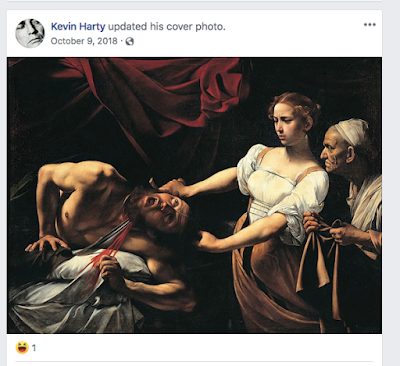 If you're not on Facebook yet, get in on the fun.

It's always a bit baffling what sells on eBay and for how much.

The latest in the world of Julie Newmar?

A simple file card with Julie's autograph on it went for $40.

Some people don't know Julie has a dot.com and a personalized signed photo can be had for not much more?

Selling for less was a full letter from Julie.

How is that possible?

Some autograph collectors prefer 3x5 cards. Their fetish is to have a neat little metal box to file their items. Anything that isn't 3x5 won't be purchased.

On Facebook, fanboys often try to get a celebrity's attention. Aside from "liking" any remark or any photo that is posted, the fanboy will post an inane question: "What beach was that photo taken at?" "What brand of lipstick were you wearing in that picture?" "You filmed that on location on New York? I'm in Asbury Park, only 4 hours away. Next time you're in New York leave a message on my page and I'll drive in and treat you to lunch!"

This type of thing is usually ignored. But when somebody takes the time to send in a fan letter and asks a desperate question or seeks advice, he might...MIGHT...get lucky.

"The characteristics that turn me on most in a man, only its hard to explain, is the ability to communicate and listen, and communicate how one realy is, and to be able to hear how the other person really is. That's all."

One hopes that this helped Jim out. How the letter came into the position of an auction house, one can only speculate.

The auction included a signed picture of Julie and James Mason from the film version of "Marriage-go-Round." I can only add one piece of trivia from personal experience: James Mason was a cat man!

Julie was not yet "The Catwoman," but James Mason was always a "cat man." I only met the man once, and it was at a cat show. Wearing a fedora and a bright colored fuzzy sweater, he was among the thousands attending a combination cat judging show and cat-product display held at a now-defunct convention center on 59th Street. He showed pure delight in beholding every different breed in each cage, taking a lot of time to admire each animal.

He was not with a lady friend (I was, so we had other things to do besides glom James Mason). Perhaps he found a new companion at the show? A cat he named KATRIN after Julie's character in the film? Maybe he noticed a young kitten and pronounced, "A Star is Born!"

Lastly, who knows why this item fetched $200. It probably is a combination of being a rare "high grade" trading card from an old set of Batman art AND having Julie's autograph on it. It's always a bit comical when Julie's asked to sign a comic book featuring a Catwoman that doesn't look like her, or that Funko "Catwoman action figure" with the square head that doesn't even look like a human. Just a reminder...you can get FOUR signed and personalized 8x10's of Julie in various Catwoman poses (and many others) at JulieNewmar.com!

True Love is Greater than Trump

In the world of gays "witch" can be an epithet applied to a man. Julie's got a very strong gay cult following, so it's not a surprise she'd ding dong a "WITCH IS DEAD...nearly" on Donald Trump. 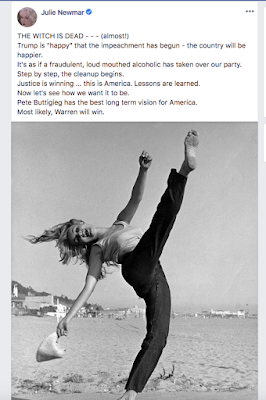 A lot of guys got a special snicker and chortle over Catwoman calling Mr. "Gray the Pussy" a WITCH.

Is it dangerous to talk politics on social media? A lot of Trump's supports, who love his rude and arrogant bullying, instantly posted their chiding and insults. A lot of others cheerfully wrote "You're right, Julie!" and hoped a 2/3 majority will send Trump packing.

Then again, any post is going to be an excuse for a sudden overboard attention-grabbing declaration of devotion. 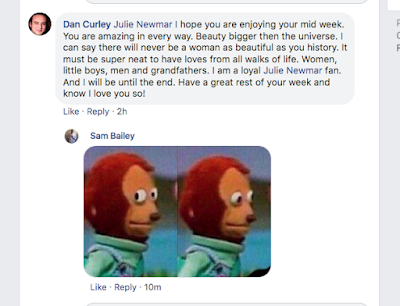 As for the response photo, it's hard to read the face of a plush animal, and know for sure if the feeling is one of confusion, agreement, or "somebody needs to be on stronger meds."